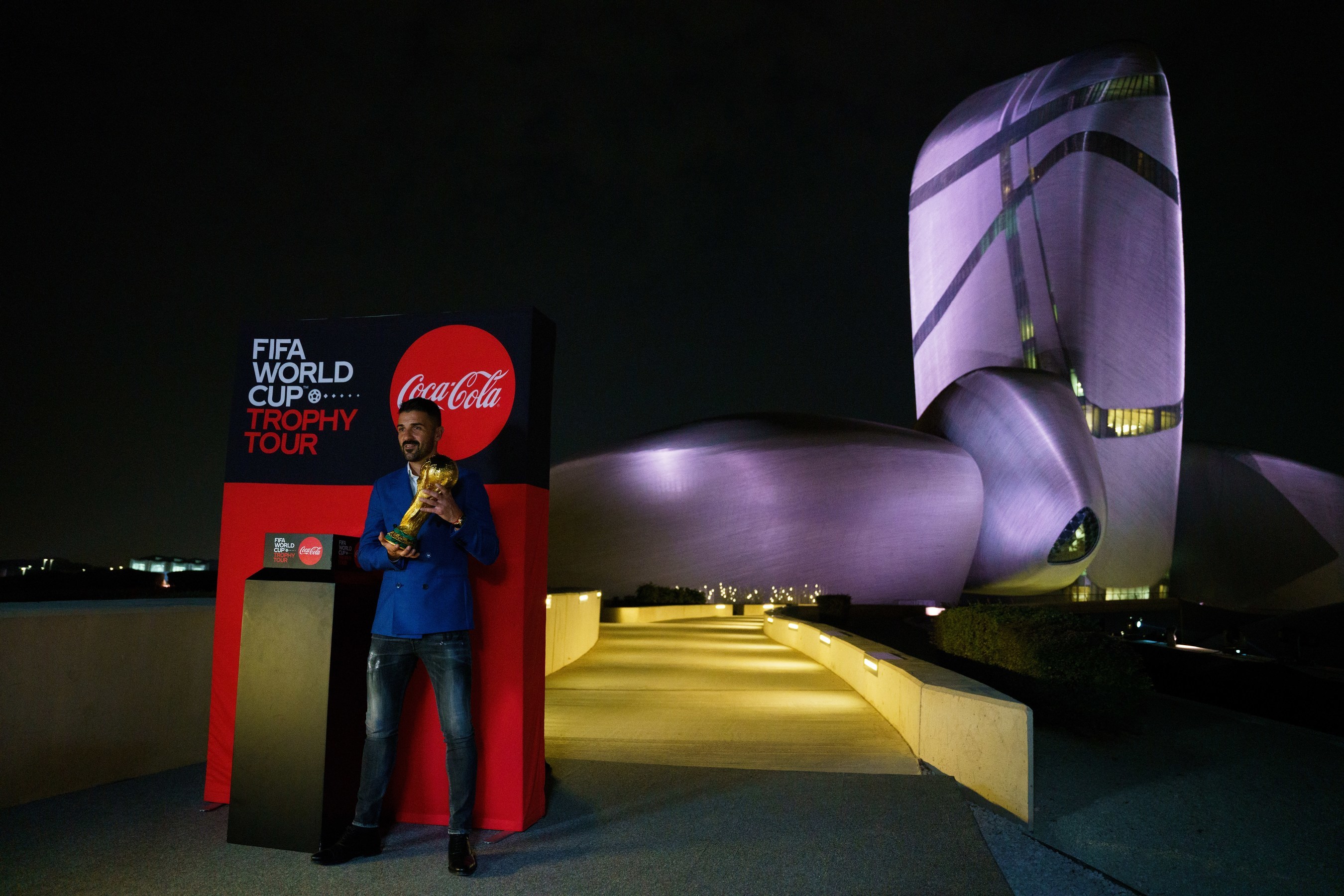 As part of the Tour, the Original FIFA World Cup™ Trophy has been traveling to 51 countries and territories as it visits all 32 FIFA World Cup™ qualifying nations for the first time. The penultimate leg of the Trophy Tour was hosted in the cities of Jeddah, Riyadh and Dhahran, in celebration of starting the countdown to the FIFA World Cup 2022™ kickoff in Qatar.

The event was part of Ithra’s Tanween talk series “Football: The Great Game of Collaboration” on Saturday November 12, 2022 as one of the talks presented by the fifth edition of Ithra’s Tanween creativity season. The session covered several topics about the passion for football presented by the Spanish football star and FIFA legend, David Villa; the international Saudi player, Sami Al-Jaber; Yasser Almisehal, President of the Saudi Arabian Football Federation; and Nazli Berberoglu; General Manager of the FIFA World Cup 2022™ at The Coca-Cola Company. The session was moderated by the sports journalist Khaled Alarafah.

The session explored the speakers’ most prominent stories about football victories and failures, how this popular game inspires the audience through the power of creativity, and how its impact is manifested in people’s lives as it brings teams, fans, nations and people from all over the world together, united by their love of the sport.

The session also explored the creative process on multiple fronts, such as dialogue, and influencing others to move forward with creative processes based on the principle of cooperation as it represents the impact of “collaboration” – Tanween’s theme for 2022, which is conducting its activities under the slogan: “Collaborate to Create.” The session has included finding the best means to collaborate with, for, and through others, and the extent to which cultural collaboration, including with nature, can succeed through technology to serve our communities.

The FIFA World Cup™ Trophy Tour by Coca-Cola, which started its coast-to-coast visit when it touched down in Jeddah’s King Abdulaziz International Airport on 11 November was organized in partnership with the Saudi Ministry of Sports and Saudi Arabian Football Federation (SAFF). Following a number of iconic visits to the King Abdulaziz Sports City and Jeddah Corniche, the trophy then flew to Riyadh for a VIP event in At-Turaif, Diriyah and a fan experience with the Original Trophy at Granada Mall. Ithra will be the tour’s last stop in Saudi Arabia before it heads to Qatar where it will remain for the duration of the tournament.

About the King Abdulaziz Center for World Culture (Ithra):

The King Abdulaziz Center for World Culture (Ithra), located in Dhahran in eastern Saudi Arabia, is a creative and interactive public hub for workshops, performances, events, exhibitions and experiences. The Center provides an enriching journey for society by stimulating diversity, celebrating creativity and encouraging cooperation with the aim of revitalizing the knowledge economy in Saudi Arabia.

Ithra is Saudi Aramco’s most ambitious Corporate Social Responsibility initiative, and the Kingdom’s largest cultural contribution. Through a range of exciting programs and initiatives, Ithra creates world-class experiences that combine culture, innovation and knowledge, and is designed to suit everyone. Ithra’s components include: the Idea Lab, a library, a theater, a five-gallery museum, a cinema, the Great Hall, the Energy Exhibit, the Children’s Museum, and the Ithra Tower.

The Coca-Cola Company (NYSE: KO) is a total beverage company, offering over 500 brands to people in more than 200 countries.

Our company’s purpose is to refresh the world and make a difference and we’re constantly transforming our portfolio to bring innovative new products with something for everyone. We also seek to positively impact people’s lives, communities and the planet through our sustainability initiatives – from water replenishment to waste management, recycling to women empowerment initiatives while we continue to create a rewarding ecosystem for our employees, partners, consumers and customers.

For more information, visit us at Coca-Cola Middle East.

About the FIFA World Cup™ Trophy

With his 15th win, Max Verstappen finished the F1 season on top

First coral insurance in the U.S. marks the rise of reef brigades